Gingrich, Asimov, and The Computer-Trading Monster! 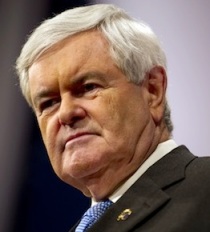 Both Republican former House Speaker Newt Gingrich and Nobel prize winning Keynsian economist Paul Krugman have a trait in common.  They grew up fervent science fiction fans, especially transfixed by the future-historical speculations of Isaac Asimov.  Gingrich wrote about this influence that helped to shape his life.

“While Toynbee was impressing me with the history of civilizations, Isaac Asimov was shaping my view of the future in equally profound ways….For a high school student who loved history, Asimov’s most exhilarating invention was the ‘psychohistorian’ Hari Seldon.  The term does not refer to Freudian analysis but to a kind of probabilistic forecasting of the future of whole civilizations.  The premise was that, while you cannot predict individual behavior, you can develop a pretty accurate sense of mass behavior.  Pollsters and advertisers now make a good living off the same theory.”

Here’s an interesting essay comparing Gingrich’s obsession with Isaac’s Asimov’s compelling sci fi memes. Writes Ray Smock: “Edward Gibbon saw the decline of Rome, Hari Seldon saw the decline of the galactic empire, and Newt Gingrich saw the decline of America.” Further, Newt was attracted to the idea of one man shaping the destiny of an entire civilization. Smock adds, “History and fiction seem more exciting when there is decline.  This gives heroes, visionaries, demagogues, and politicians something to fix.”

As the similarly obsessed author of Foundation’s Triumph, who tied many of Isaac’s loose ends, I’d have a thing or two to say to Newt! Could be an interesting intellectual tussle.

Still, this aspect to his background speaks well for him. Ten points.  Out of….

== Why a Transaction Fee Might Save Us From The Terminator! ==

Here’s a vital issue under discussion (at last) on both sides of the Atlantic.  Governments, both rich and poor, urgently need two things: a way to calm speculation in the financial markets and also new ways to raise revenue. In late September 2011, the European Commission proposed a tax or fee on financial transactions. This appears to be part of the newly announced European Union plan, with Britain the sole dissenter.

“A levy of just 0.1 percent — or even just 0.05 percent — levied on each stock, bond, derivative or currency transaction would be aimed at financial institutions’ casino-style trading, which helped precipitate the economic crisis. Because these markets are so vast, the fee could raise hundreds of billions of dollars a year – from the sector of the economy that made towering profits while being directly responsible for our present depression, ” writes Philippe Doust-Blazey in the New York Times.

Read the article.  But note that it does not mention the top reason for such a tax!  That it might benefit real human investors by slowing finance and equity trading back down to the speed of human thought.

Would that necessarily be a good thing? The concocted rationalization you will hear, in opposition to this proposal, is called “market efficiency.” According to what’s become a bona fide cult, any process or innovation that allows ever-smaller increments of trade to happen ever-faster is “efficiency,” and that will automatically lead to better allocation of society’s capital, and thus a skyrocketing economy.

This is wrong in many ways, starting with the pure fact that the flourishing of fast-cybernetic trading has directly correlated with the steepest decline in the health of capital markets in a century.

But absolute refutation comes from a different direction. From Physics, biology and thermodynamics.

Living creatures thrive by finding a steep gradient of usable energy. Green plants utilize the fact that incoming sunlight is thermodynamically clean and much less entropic than the surrounding environment.  (Greenhouse retention of Earth’s infrared radiation is thus intrinsically entropic.)

Some of this gradient is used by the plant to grow and reproduce, or else gets stored away, while some is lost as transaction cost.

Animals in turn consume plants for that stored useful energy, investing the time and effort to bite and chew and digest in order to benefit from some of the remaining gradient. Predators then pounce and bite and digest in the next stage. There are always losses with each transaction, hence the number of predators who can be supported at each scale gets smaller and smaller.

Along the way, each plant, herbivore and carnivore has parasites, intestinal worms and bacteria, etc., that grab some of that stored energy along the way. If they grab too much, the animal can’t get a steep enough or plentiful enough energy gradient and it dies.

Can you see it yet?  Beyond a certain level, increasing the total number of transactions does not make living systems more efficient.  It flattens all energy gradients and makes life unhealthy… even dead.

Returning to capitalism… yes, the existence of a stock market does create a habitat-ecology for living companies to compete, to form alliances, to prey on each other, to seek out the capital they need in order to grow.  Stock markets are vastly over-rated in the latter category, since the companies themselves benefit very little from wild swings in share price, except when offering NEW shares. (There should be substantial difference in the capital gains tax for new shares than for gains in the simple trading of old shares, an activity that only helps capitalism at very low efficiency.)

Still, you get synergies.  When a human investor looks at a company’s new product and bets “this new gizmo or service is gonna go big!” and orders 1000 shares on E-Trade, at low commission, then there’s a good chance that capital will flow to a place that can benefit and utilize it, all motivated by the hope of a nice profit “meal.”

Those pushing computerized trading… programs that dive in and pounce on any detected market trend, making millions of automatic trades, detecting or anticipating the decisions of human traders… these folks tout “efficiency.” But which efficiency?  For whom?

(Indeed, a whole new transatlantic fiber cable is being laid, just to enable a few brokerage firms to gain a couple milliseconds advantage; they’ll make billions. Do you see how that helps our market economy? I can’t.)

Want the exact parallel in nature for these systems? It is those gut parasites or e-coli or salmonella, or Typhus, who nibble away the gradient of potential profit that the human trader perceives, between the current asking price and what he or she feels the stock may soon be worth.  These programs can now detect people getting ready to buy a stock they like, and pounce to snap it up first, then offering it to you at just a little higher price. You lose a bit of that gradient, because someone – a program – who did none of your research simply pounced faster than you ever, possibly could.

Yes, there is a life- analog, but it is not the Lion King’s Circle of Life.  It is the core logic of parasitism. If you ever read Douglas Adams’s The Hitchhiker’s Guide to the Galaxy, these are the perfect passengers aboard the Golgafrincham B-Ark.

We need a small Transaction Fee not only because it will bring in revenue from the sector of the economy that made huge bonuses while wrecking our economy, restoring an emphasis on those providing new, competitively innovative goods and services.

The bigger reason is that human investors won’t care about – or even be aware of – a 0.1% trade fee.

But those computerized parasitical systems will howl in agony!  Thus, it will give you  a better chance to gain from your own savvy and insight, when you log into your E-Trade account.

So, what does all of this have to do with The Terminator?

Well, if you’ll recall the by-now cliched premise of that film – it supposes that (sometime in the future) the U.S. military would develope a super computer/program/system called “Skynet” that  gradually becomes self-aware through a process that theoreticians call “emergence from complexity.” This is actually taken very seriously by deep thinkers about artificial Intelligence. Indeed, our first encounter with AI may come exactly that way… by surprise.

Only… supposing that this malevolent AI comes from a military source is pure Hollywood.  Such systems are built with high priority to systematic reporting, accountability, multiple redundancies, fail-safes and obedience to chain of command.  No, there are other complex computer systems that seem far more likely to suddenly become self-aware in powerfully dangerous ways.

Take those high-speed trading systems we’ve been discussing. They are growing incredibly sophisticated, at a very rapid rate, absorbing and incorporating models of human psychology, with one goal in mind. To appraise and predict behavior patterns in order for the program to track and to pounce on opportunities for predatory trading.  Competitive ferocity is the only criterion for success. Indeed, if you were to even propose inserting balancing factors like ethics or morality or accountability into such a project, you’d at-minimum be laughed down and probably fired.

Moreover, these systems are receiving billions in funding (including their own new transatlantic fiber cable) entirely in secret.  There are no public agencies involved. No third party observers. No Congressional oversight committees.  No supervision whatsoever. Laboratories developing new genetic strains of wheat are under closer accountability than cryptic Wall Street think tanks that may unleash the first fully autonomous AI… programmed deliberately to have only the behavior patterns, goals, attitudes and morality of parasites.

And so we see the ultimate reason to demand the Transaction Fee. At a low level – say 0.1% – it would never bother a private citizen who is optimizing his portfolio on E-Trade. But it would remove the horrific incentives that Wall Street “geniuses” now feel compelled by, to invest in these monstrous, hyper-fast trading programs. The fee can be tuned to give that human a fighting chance and to discourage the very worst kind of artificial intelligence from leaping upon our necks out of the dark.

31 responses to “Gingrich, Asimov, and The Computer-Trading Monster!”